Race Review: The Big Half 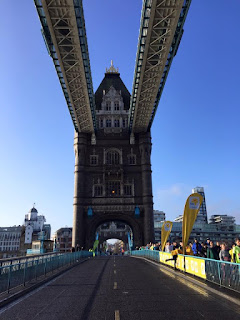 Has it really been so long since I have done a blog post? I guess so... but to be honest my running has been pretty terrible since Bournemouth. I was diagnosed with Tendinopathy which obviously is awesome. I have cut my running wayyyy down, like maybe 6-12 miles a week.

Which of course made The Big Half a bit of an interesting conundrum. My longest run after Bournemouth (which was October 2017) had been 8 miles and I had DOMS for about four days after. How the hell was 13.1 miles going to go on me? I had been cross training like a mofo (I can now swim a mile... huzzah) but at the end of the day would that be enough to see me to the end? Also, would my tendons play nicely or would the flare up like they sometimes do and make me cut the run short? Would I have to run/walk?

I told myself that if did not come out of The Big Half relatively OK-- I was going to give up running for 2/3 months while I majorly focused on recovery. No. Running. At. All.

PRE-RACE FUNSIES
Needless to say I was very apprehensive at the starting line. Sick almost. There was a lot riding on the next few hours, so I wanted to ensure I gave myself every opportunity to succeed. I stretched, I would keep my pace reasonable, I didn't over/under dress.

Mother nature decided to help out too. After #BeastFromTheEast and #StormEmma wreaking havoc across the UK a few days prior, Sunday was sunny and dare I say it.... warmish?

I am so glad the race organisers held fast against the rising tide of Twitter discontent and kept the race on. It would have been ridiculous given the weather conditions in London that day. However, I also applaud them offering to make it a virtual race for those in other parts of the country who could not make it due to transport woes. That's just good form.

THE ACTUAL COURSE
Living near the area, there were really no surprises for me. I have run the most of the course in some way or another in the 6 years I have lived here. The cobbles are the stuff of legend on the Marathon course, so I knew to expect them too. Mother nature also ensured there was no ice or anything that would cause an unexpected slip.

Let's talk about #tunnelgate. People were really upset about the Limehouse Link Tunnel-- which according to some went on for forever. I can assure you it didn't go on for forever (although even I muttered something about this when I was in it), it went on for about 1 mile. I checked it on MyMyRun. 1/13th of the race. I do agree they maybe should have put that there was a tunnel on the official course route but I don't think it should have ruined anyone's race. The group I was around were having fun hooting and hollering, which of course is 1000x more fun in a tunnel. Just enhance your calm people!

I am pretty sure the highlight for everyone was going across Tower Bridge. The darn thing is just so lovely and has been around for quite a long time (opened in 1894) - it served us well for motivation after we passed the Mile 7 marker. Did I tear up a little bit? Yes. I have run over that bridge more times than I can count but running it on the road is just an awesome feeling. Thank you thank you Big Half for making that possible.

I had a group of friends waiting for me on Tooley Street which was also awesome, however I think I got a cramp waving my arms like a wacky inflatable flailing arms flailing tube man. So I slowed my pace and dug in for the last 10k or so of the race.

I leave it to the audience to judge. Thanks to Laurie for the video-- and of course to the SE1 crew for the support!

I will admit-- the last bit of the race is not the most exciting. Again though I knew what to expect-- so I spent the time thanking marshalls, spectators, and just trying to keep my form on some level of respectability. I also picked up a blister somewhere and I was trying to be conscious of that. I really enjoyed the music near the Printworks building, which subsequently hosts music on a regular basis.

I finished in 2:04. I got my medal. It reminds me from something from In Living Color. It is definitely unique I will give it that.

RESULT
My tendon felt pretty good, I just had the general overall ache of someone who had not really trained well for a half marathon. Fair enough. No DOMS to speak of and I had my physio appointment and he greenlighted me to start a more 'normal' running routine as long as I kept doing the exercises and didn't go crazy too soon. I can live with that. Oh yes baby-- back at it (in a safe and controlled manner!)

ADDITIONAL
Oh boy that's not all! They had some nice 'environmentally friendly' aspects of the race too! I won't get into the whole plastic water bottle debacle-- an issue in almost every race I have been on. However, they did have 'green cups' for the sports drink station and they had recycling stations for the foil blankets at the end! Bonus! 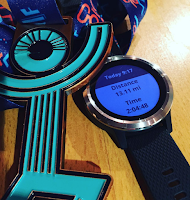 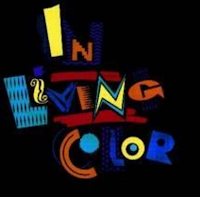