I cringe when people say that running in London is boring. I really cannot fathom why anyone would say it. Sure it doesn't have the stunning views of peaks, but honestly not many places in Southern England do. I love its varied terrain and surprise hills (well love on the latter is a string term). I also become indignant when people moan about the lack of green space in our fair city. 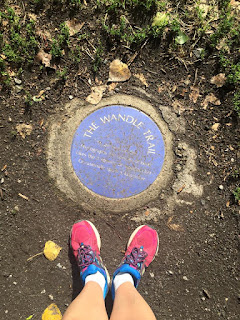 According to the Independent, "47% of London is green space" (source: http://goo.gl/cyV0GB). Sure this was in 2014... but it cannot of changes that much! I will admit while working in the City its very hard to believe that number, but you just need a map and a tiny sense of adventure. And Oyster card helps too :)

This weekend I did 'Wandle Trail' which is an 11.68 mile trail going from Croydon to Wandsworth Town. I took the train from London Bridge and in about 30 minutes (and one change) I was in Waddon trying to find the start of the run. I am not going to lie, I was stopping a lot and checking my GPX route I found a link to from this Guardian article. I felt like I was following the Wandle Trail signs, but then checking my GPS it was saying I went off track.

It was only after going in a loop (literally) that I stopped and had a think. I whipped out my paper map I printed out (yes folks, I had a backup because YOU NEVER KNOW) and noticed that my GPX was for bicycles, hence not exactly following the Wandle Trail footpath. Once I decided which one to follow (cycle path 20) all my issues suddenly disappeared and I was off.

There was so much green on this run it was great, and had I chosen the actual footpath there would have been very little road running. The few sections I did have on road all had pavements so it was safe. Plenty of other people out as well, so never got the 'creepy isolation vibe'. Morden Hall Park was amazing and would be great for a run in its own right. I also found out Mr. Moose's dad used to do cross country running there when he was secondary school-- which made the run even more awesome because it was a bit of family history that I didn't know about. 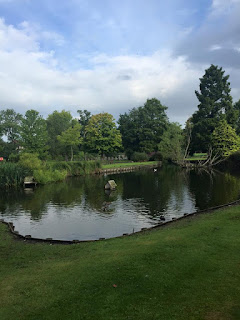 Things obviously got a bit back to reality again in Wandsworth Town, but I was lucky as there was a coffee shop and biltong stand (two separate stalls-- would be weird combo) right outside the station! So I got my protein and caffeine all in one easy go.

I am a huge fan of varying your running routes to keep things interesting. I encourage people to find a path near you and give it a go. If unsure, Google is your friend as are running stores near you. Heck they probably have their own group runs in case you are nervous venturing out on your own!

Here is my route in case interested... my loop added about another mile to my run, which was fine by me as it allowed me to see some pretty parks and lakes.

Running in a Herd

Mrs. Moose flips through her Running Guide to London Book...

"I think I am going to go do Petts Wood and Jubilee Park tomorrow. I think I can make it a 10 miler if I loop both"

Mr. Moose looks up from his computer screen, and tentatively asks...

This was one of the best questions my husband ever asked me (besides the obvious one of 'will you marry me'). I have always felt pangs of guilt as I would jog away from him to take my place on the starting line of a half, and always wished he would give it a try himself. I would never race WITH him.. no no, I want to have a LONG and PEACEFUL marriage. Knowing he is running the same race as me however I would find very motivating and we could then celebrate together. He is slowly getting back into running after a long hiatus, so I am silently hopeful. Supportive but not pushy.

"Of course!" I say delighted.

There are certain things everyone in a group run (be it 2 or 20 people) must understand on the get go. These are more guidelines really, as some running clubs can be very competitive (causing most of these rules to fly out the window). Think of this as more 'running with mates'.

I am not use to running with others on non-race days (moose are quite isolated creatures), but I really enjoyed running with my other half. We both had headphones on but its was reassuring to have him there, especially when we did get a tad lost (yes yes I was leading...). He likes a bit more structure to his runs (a set, known path that can be easily followed) but we made it work, and I felt I could help him pace himself.. leading to his longest run in a while. He helped me by being there in the peripheral vision-- willing me forward on the inclines (I can't let him see I am tired!!)

We got off at Chiselhurst and the Wood literally started across the road. It was bit confusing at first (where does this trail start??) but we eventually found the Petts Wood Circular Trail and set off on it. We passed horses, cows, sheep, and an amazing house that looked like it belonged in an alpine forest (*jealous*). There were some inclines, but the views were wonderful. It was hard to imagine central London being only 25 minutes away. This map may have been helpful but hindsight is 20/20... 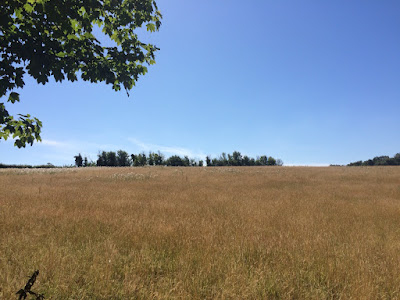 Mr. Moose looks at me and smiles, "Thank you for letting me come with you. It was an amazing run!"

Did I do my desired mileage? No. But with praise like that from my best friend-- I was not too fussed ;)
Posted by -Sketchymoose at 9:42:00 PM No comments:

I had high hopes for this my Rock n' Roll Dublin Half. Sure, I didn't train very well and my eating habits were lackadaisical at best. But come on, I have done a few half marathons before so I should be fine right? I could still try for my sub goal of 1 hour 55 minute or even bust my PB of 1 hour 50 minutes?

Sunday August 2
0630: Wake up, run to bathroom-- this can't be a good sign.
0720: After having a sensible breakfast of cereal and some fruit with my parents (who were over visiting and would be their first ever race they have watched) had to run upstairs to the bathroom AGAIN...
0729: ONE more trip... then I will be fine. Off to the race!
0732: Ok, seriously last one before go time. This is not good.

No it was not good, although the Irish powers that be held off on the rain for the duration of the race (it wasn't looking that way walking to the start), I could not shake this upset tummy. I am not entirely sure what caused the uncomfortableness, but I have a feeling it had to do with the drinks consumed the day before. I thought I would be fine as I stopped well before 2100 and was not drinking in fast succession, just slow and steady throughout the day. Guinness at lunch, Guinness at the Guinness Factory... more beers pre dinner and one drink at dinner. I wanted to blame the food, but in my heart of hearts I feel that it was probably the black stuff resulting in my current state.

Oh well-- nothing to be done about it, the gun has gone off and I had to start the lovely 13 mile run through Dublin.

I was doing pretty well pace wise for the beginning 10k-- I had my Garmin letting me know when I went above a 8:45min/mile pace as that was the slowest I wanted to go. However around the 5 mile mark I started to feel the rumble in my bowels...

I immediately thought of those photos of runners who went to the bathroom but skipped the bathroom part and just kept running. Paula Radcliffe has some doozy's if you want to Google Image search.

However, unlike Paula, I am not a World Class Athlete with records to break, and with my parents watching I decided it may be best to not defecate myself. Luckily the Rock n Roll logistics crew (AMAZING maps by the way-- anytime I have a scale chart I am pleased) had port-a-loos strategically placed so I was able to duck into one fairly quickly. However, this of course effected my official time...

After that I never really fully recovered. It didn't help that miles 6 and 7 were kinda boring and narrow. Phoenix Park was a welcome change of scenery, especially with the Irish Countryside looming in the distance. That feeling of joy soon turned to terror as there were some doozy hills right at the end.

I had all but blocked out my helpful Garmin vibrating to let me know that I was still going slower than my desired pace. Mile 7 was my last vestige of staying around my goal-- it was all going to shit (pun intended). I saw a woman being treated by medics and thought "I could just lie down right next to her and say 'when you have a moment' to them".

Below is the elevation chart with my mood...

That last hill, I sincerely thought of giving up. It took (what I felt) as every fiber in my being to keep going. I suppose this is the wall people always talk about. It was horrible. It was even more disheartening to see the 2 hour pacer pass me. He heard my audible swearing and encouraged me to keep up-- which I kind of did but not as closely as I should have.

That feeling seeing the timer on the last hundred meters or so is the 'do or die moment' for every runner. I decided I was going to try and up my speed and at least cross the line with the 2 hour pacer. Like a bulky freight train I gave it the beans, and I could feel my chest constricting-- I had so little left in the tank. I was urged on by the sight of my parents, my mom screaming wildly at me whilst my father looking the wrong way.

Bowels grumbling, chest heaving, I gave it the final push across the line.

My official time was two hours and 50 seconds. A far cry from my goal and actually it is my worst half marathon race to date. I feel it was a defeat in some ways, but in trying to find the silver lining I feel that this was the first race I did that I really wanted to give up but did not. One more race to chalk up to experience!

You can see the race info for me below. I hope everyone who raced enjoyed it-- it was a lovely day in a lovely city. I cannot thank the Rock n Roll team and all the volunteers. Maybe next time I will lay off the black stuff next time :D