The alarm went off at 0515 and after the initial shock my mind instantly went focused: Today is the Ultra. I went through the pre-race motions like a machine, having done them so many times in the past, but today would be slightly different in that my distance will be the farthest I ever went in one go. Breakfast and kit in tow... we left for Marylebone train station to meet up with other and make our way to Princes Riseborough (~35 minute train journey) for the Chilterns 32 Mile Ultra put on by XNRG.

Shuttle Service: Could not have been easier. Shuttle was there when we arrived and drove us to the school where the start/finish was. Whilst en route I heard there were about 280 entrants, a fair number of other crazies :)

Check-In: Sign in was pretty straight forward, you name gets you your bib and your cool RFID gizmo which is used to check in at all the Check Points. It was not obvious what to do with bags but a simple query got you the answer. Free tea and coffee. Nice bathrooms (think my longest wait was 5 minutes) with plenty of loo paper.

Race Briefing: Short and to the point. Good for newbies like me who were panicking and not 100% listening just due to nerves. Check in at every CP, follow orange arrows, look for tape (with example). Suddenly we were off!

Settling in for the Road Ahead... 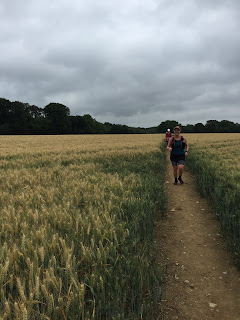 I settled in with Jo, who was also doing her first ultra, for a chat and to get into the rhythm of running. The slight drizzle had turned more into rain at this point. We were hoping it would not be like this the entire time! The views were slightly muffled by the rain but lovely rolling hills could be seen for a pretty long way.

So people who do races go through the pre-race prep religiously. Some use checklists, some lay all their kit out the night before... just to ensure they have everything they could possibly need. I thought I had this down pretty well. But, as always, something happens that you were not prepared for and leaves you standing there a bit dumbfounded.

At 8k we passed by some spectators when someone shouted 'You are leaking!'. I was wondering why my backside felt really wet as it wasn't raining that hard. I take out my water bladder... and there is a popped seam at the bottom... and all my water was leaking! Shit. Why don't I have gaffa tape? Was my only thought. I held the bag while Jo tried to use compeed to quick patch it. No luck. Too wet. I was starting to panic. Would I have to DNF all because of a bloody water bladder? Then, an angel appeared with the bib number 73 or 83 (at least I believe it was that number, Jo paid much more attention than me).

What are the odds of that? I could see someone having a spare water bottle, but a spare bladder? Thank you running Gods! I only hope Angel 73|83 got his water bladder back (if you happen to be reading this and you didn't please let me know, I left at at the results desk for you!). You saved me the extra psychological stress of running sans water or maybe even DNFing.

To be fair the checkpoints were about every 10k or so, which really broke up the course nicely. And gave us a manageable goal to shoot for ('ok just to the next CP...')

Well stocked with water, squash, sweet and savoury snacks. Volunteers would refill your bladders/water bottles for you whilst you refueled. My favorite was CP3 with the sausage rolls... my only regret was not grabbing a handful and stuffing them into my backpack. I also really enjoyed one of the final (more tenuous) road crossings that had brownies on the other side. Nothing like chocolate to push one forward to the end!

Even with the rainy and general overcast weather. The views were phenomenal. We went through forest, fields, and flats (peppered in with some hills of course!). On a hot day I may have found it very displeasing (open areas are death knells to runners when it's baking) but that day was not today. We managed to snag a few photos along the way towards the end.

I kept running with Jo, when we got to CP3 she said "Feel free to go on ahead". I said "We came this far together we should finish together".  I always considered myself a lone runner when it came to longer distances but I can honestly say running with someone else really helps the miles to tick away, and you encourage each other (verbally or just being there) to keep going.  For first-time ultra runners, I almost say you should find someone and stick with them... it will do you a load of good mentally. 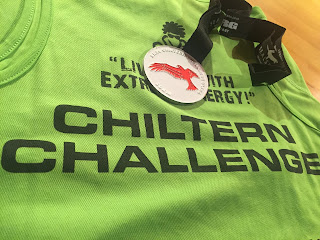 We rolled back into the school amidst cheers and my husband snapping photos or our triumphant return (which happened to be slightly downhill so we could look like we were going 'at speed'). We received our medals and Jo got her certificate for completing her first ultra (I forgot to tick the box, so mine will be coming unceremoniously via Post... RTFM people!). Was it fast? No. But did we finish? YES.

They had showers (amazing) and again more tea/coffee/cake for consumption. The shuttle service was still in motion so again no worries getting back to the train station.

I may put ultras on the back burner until I can really work on improving my marathon time (Jo and I high-fived when we hit the marathon distance), however in retrospect I do find them very challenging and enticing. I also find the running group VERY friendly-- every race I do of course is a friendly lot but in ultras it seems even more so... it's like everyone knows everyone else is in their own level of personal hell, so we may as well all trudge along together and encourage everyone we pass along the way to help them realise they are not alone and no matter what their efforts are to be celebrated, not scoffed at.

What is it Churchill said? "If you are going through hell...keep going" 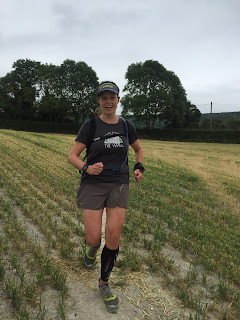