Secret London: Whispers of the Walbrook

The book "London's Lost Rivers" by Tom Bolton says this is a 'river walk without the river'. They could not be more true. I completed this less than 2 mile run on the way to work this week, but it was a bit harder to navigate just due to the tall buildings and GPS getting confused.

The Walbrook cuts through the original Roman city and runs between Cornhill and Ludgate. It formed the eastern boundary of the Roman Londinium, and was completely covered up by 1463.

I do not recommend doing this run during the morning weekday, its probably best done a weekend. Any joy gotten from this walk was diminished quickly by battling the morning rush hour.

Once again, you can find the route here and below are more fun facts and photos!

Hang out with me long enough and you will find out I love be underground in London. We very rarely stop to think about the subterranean London beneath our feet. Not just the tube, there are countless other tunnels and chambers itching to be discovered (well some maybe not). In fact, one of our 'coffee table' books is Subterranean London.

One aspect that has always intrigued me are the hidden rivers of London. There are quite a few, but only a handful really stand out. Most know of the Fleet, but there are actually 8 majors ones? These rivers fed into the Thames and shaped London into what it is today. And what happened to them? Built over and diverted into sewers most of them- so very little can now be found of them above ground. However, if you know where to look, you can see traces of these beauties.

I have already run the Wandle River, probably the most visually prominent of the rivers, so I want to cover the other seven:

I used the book, "Londons Lost Rivers" by Tom Bolton as my guide, and if you are more a walker I suggest you take a copy and go try these yourself. I used the directions to create a GPX route of the route and then using the DwMap application, synced the route to my Garmin. Goodbye staring at the phone looking to see where I made a wrong turn!

Here are my adventures from the Effra River, which started in Westow Park near Crystal Palace.  I wont provide all the interesting tidbits from the book, I will leave that to you to learn and discover!

Sometimes it's hard to stop doing something you quite enjoy. I have been having a 'niggle' (that is the technical term) in my legs for a few days now when running. I kept thinking to myself 'it will go away' and kept going on my training. However, the niggle was not going away... then this past weekend happened.

I have had this weekend planned for a few months now. A trip to Norfolk for a bit of RnR with Mr. Moose. There would be walks, there would hopefully be some cool stuff to see, and there would no running. It could not have come at a better time, as this was my excuse to not run for a couple of days.

If you live in London (heck even if you don't), I highly recommend taking a trip out to the countryside to recharge. I am not talking Lake District distances, we limit ourselves to a 2-hour driving/train radius. That puts you almost as far west as the Bournemouth, as far east as Kent, South to Brighton and North to most of Norfolk.

Some places that I have been and can recommend are provided below. Do not worry, there are plenty of other activities to do, you will not even miss your running shoes (ok well maybe a little bit)


Wherever you go, bring a sense of adventure. There are so many amazing places in the UK to visit, some are literally at your doorstep!


Having lived in London for a few years, it's always great to reground yourself in the City. To visually go through its many parts, finding new spots to check back at later, marvel at its beauty, and even get frustrated with it. This pretty much sums up my 15 mile run of the Circle Line.

This idea is not my own, it is the master child of Annie Ross, founder of eXerk, a London based 'challenge' where Annie did 52 adventures in 52 weeks last year. You can read up on her Circle Line adventures here. (so nice, she did it twice).

If you want the GPS route I took, you can download it here. I figured I would show off all my photos of the 27 stations and while doing so, provide useless pub trivia facts about each! Most are from Wikipedia with the quote from Great Portland Street from "London Underground Facts" by Stephen Halliday. 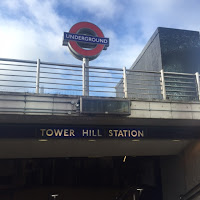 This station sits atop the old Tower Hill Station, which closed in 1884.

Replaced the station called Mark Lane, which was a bit further west

Close to Tower of London and Tower Bridge, my favourite thing in London. 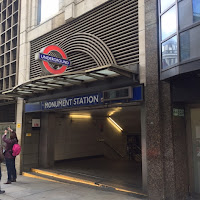 Linked to Bank Station, making it easily one of the most frustrating underground stations. In fact, the Bank/Monument station combo was voted the "Most Disliked" station in 2013! 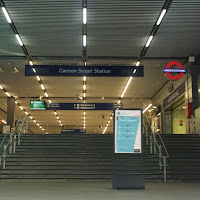 The original structure opened in 1866, which looked a bit like what Charing Cross looks like. All that remains are the two red brick towers.

The name does not come from military cannons at all. The street was originally called 'Candelwrichstrete Street' (1190... NBD) and after several hundred years evolved into Cannon Street. 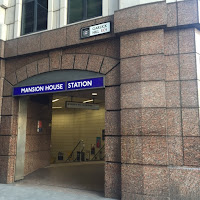 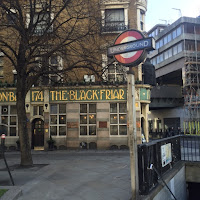 Technically across the street, but this pub is so fantastic it deserves a photo 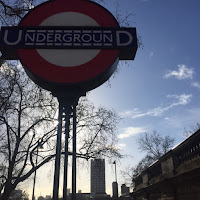 Used to be called 'The Temple' but the article was dropped

Favourite station of Aussies due to its proximity to Walkabout 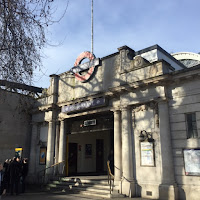 Closest to my favourite wine bar in the city, Gordon's

At Embankment Gardens right next door you can see how far the river originally went to. The Embankment itself was created as a result of the new sever system being built to fight cholera. 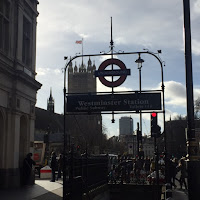 One the of the first confusing tube stations for me. I also got pick-pocketed here once.

Was one of the deepest excavations in London, going as far down as 39-meters. In doing so, they did some clever sh*t to protect Queen Elizabeth Tower. I suggest you read about it here. Its much easier than me trying to explain it!

UK's second busiest terminus after Waterloo. Definitely has the most depressing coach station 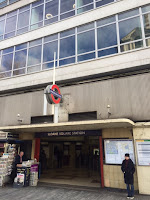 The river Westbourne can be seen going through the station in a large pipe suspended from girders. If you can't work around it....

In 1960,  Peter Llewelyn Davies, one of the inspirations for the male characters in Peter Pan, committed suicide here. 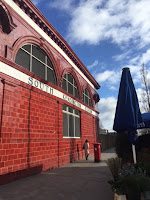 Closest station to the Natural History, V&A, and Science Museum

The passageway the connects the station to the museum used to cost one penny to use. Who says we are spending more money nowadays?!

During WWI was used to store art from the V&A as well a china from Buckingham Palace. 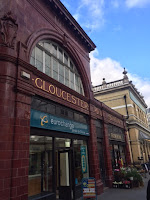 Originally opened as 'Brompton Station', it was renamed in 1907.

The building for this and South Kensington was designed by Leslie Green, hence the same ox-blood red glazed terracotta on both. 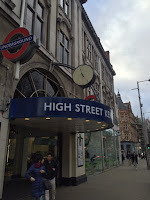 Was getting sick of dodging Ferraris and Range Rovers

Wikipedia had nothing of interest really, so I will say there is quite a large Whole Foods nearby which has a Bone Daddies in it. 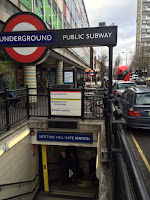 On the boundary of Zones 1 and 2

There used to be a "Notting Hill" Station, which caused some confusion, this was later changed to Ladbroke Grove. 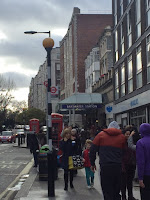 Closest station to London's only year round indoor ice rink

Building this station resulted in the 'fake' houses on Leinster Gardens. They have facades looking like houses but in reality cover up the station/tracks. People who watch Sherlock may recall this plays a key scene in Series 3... 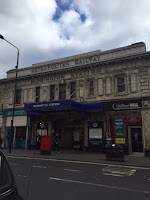 Opened as Paddington (Bishops Road) in 1863.

Yes it's true Paddington Bear was named after the station.

Engineered by Isambard Kingdom Brunel. Yes the guy who built the Thames Tunnel in Rotherhithe and the Clifton Suspension Bridge.

Part of the original Underground stations opened in 1863 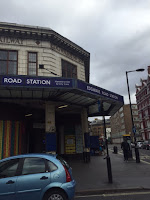 Only 150 meters away from Paddington Station

There is a separate station (also called Edgeware Road) that serves just the Bakerloo line. Oh, and then there is Edgeware which is the Northern Line. Brilliant work lads.

It was at this point I was getting tired.  Around 10.5 miles. 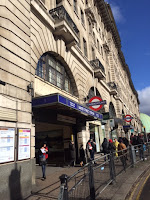 Served by 5 different lines, and like Edgeware Road one of the original stations opened in 1863.

Two bombs were discovered and diffused here in 1970. No one was injured. 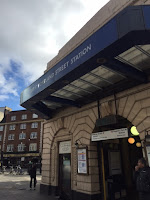 Marks the border between Marylebone and Fitzrovia

Before electrifying the lines, people complained about smoke in the tunnels. These people were assured by the Manager of the railway that the smoke was good, with GPS "being used as a sanatorium for for men who had been afflicted with asthma and bronchial complaints". 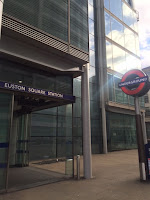 One station I did not know existed, I thought they meant Euston. Colour me embarrassed!

Close to the Wellcome Collection, a free museum I highly recommend 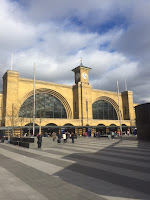 Definitely one of my favourite buildings architecturally

They thought about making an airport above Kings Cross Station

Biggest interchange on the London Underground, with 6 different lines on 4 tracks! 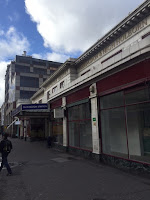 The terminus of the original London Underground opened in 1863

When it was moved it was originally renamed to Farringdon & High Holborn. You can still see this on the one side.

Seems like it will be a big deal when Crossrail is complete. 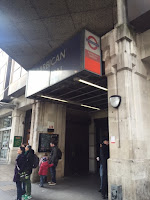 At this point I wanted out. 14 miles.

Probably one of the bleakest looking entrances I saw that day 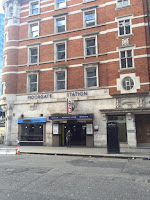 Site of the Moorgate London Tube Crash in 1975, the worst accident in the history of the London Underground during peacetime (43 people killed) 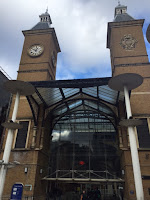 Opened in 1874 for the underground and was called Bishopsgate. Was renamed to its present name in 1909. 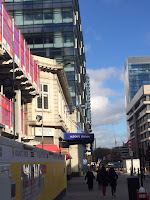 Did not care as I just wanted the pain to stop. 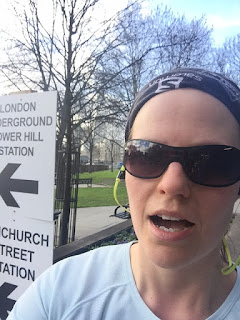 DONE! Back at Tower Hill!

How Did I Feel: Not so great. I was not even looking at my watch but something just switches off at mile 13 which makes my legs feel like lead

How Did I Recuperate: Coconut water + pomegranate juice... fantastic

How I Felt About the Route: I enjoyed it, but kept getting annoyed about passing all the green spots! Start early to avoid people

Well thats it folks! I leave you with my last view of the run. Will you be joining the CircleLineRunClub soon? :) 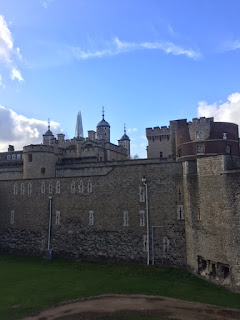