Everyone always says that your first is never what you expect. The nerves, the apprehension, the too fast out of the gate. I told myself I have heard enough of those things to know I should not be doing them. Yet. Somehow.... here we are.

I am of course chuffed to bits I finished. I was even more chuffed about the free malasadas (donuts) at the end. I was not too pleased with my performance. Who is ever 100% with any of their first marathons? Anyways, lets kick it off.

Training? What Training?
I had some injury which limited me on my running pre-trip. When given the choice of not running to try and rest up the hip or running through the pain, I chose the former. This meant I never got in the training that I should have done. I was able to run a LSR of 20 miles before, so I knew it was doable but would be a slog.

Two Week Taper
We did this a bit backward. Rather than vacation after the big event, we holiday'd before. In my defense, I did a few runs in that 2 week period and we also did some hiking and diving. However, I was not going to skimp out on the plate lunches, poke, and loco moco whilst there. So if I wanted it, I ordered it. Mai Tai? Yes please. That did NOT help.

The Prelude
My alarm went off at 3am. I felt very smug as I prepared my Quaker instant oatmeal and nibbled on a banana for breakfast. That was soon replaced by annoyance as I had no spoon with which to eat the oatmeal. I used my fingers. I used the banana. We got through it.

After asking Google Maps, we decided to walk the 2 miles to the start rather than wait for the buses at the zoo to take us to the start line. It was interesting as the nightclubs had let out so there was a colourful combination of runners and revelers. We arrived on site near the Ala Moana Park at 0400.

I jogged over to wait in the loo queue. That took about 45 minutes. I would pay money to have a dedicated loo for me at the start of races. I also get annoyed that people do not understand the rules of the loo queue. Barely made it into the corral to wait around an additional 10 minutes to get moving. Me and about 30,000 other people were slowly but surely underway.

The Start
Off I went. I was trying to keep a slow and steady pace. I knew this would be important given the humidity. However I speeded up quite a few times to get out of the way of other runners. I also found it interesting that there were runners STOPPING to get their photos taken at Christmas lights. What? I know its not a competition per se but just full on stopping seems weird. I also enjoyed the Japanese tour groups of runners. Each group had a different hat on to identify themselves. One group had a hat with Mt. Fujisan on it. Another had a stuffed pineapple. This pleased me.

I skipped the first 3 hydration stations. Too crowded.

25% of the way Completed (pace 10:27min/mile)
I realise that 65% of the course is a giant switchback. I hate switchbacks. I find them depressing seeing people blaze by me when I have an additional 10 miles to go to get back to that point. Sadness.

50% of the way Completed (pace 10:41min/mile)
I started taking Bloks a little earlier than halfway. Ripping the Bloks packaging is hard when sweating. It's humid. I am not very chuffed. I make sure I am stopping at all water stops now. I take sponges where I can and use my Buff to keep it on top my head. Win.

75% of the way Completed (pace 10:53min/mile)
The sun has come out. Oh god. Its now humid AND hot. England has not prepared me for any of these scenarios.

Between 75-100% (pace 11:18min/mile)
I may have started to walk a bit. It was just draining and OF COURSE we are going uphill. I felt like walking was faster than my plod (it wasnt). I was keeping a runner in my sights to make sure I didn't slow down too much. I decided to run 7/10 of a mile and walk the remaining 3/10 of a mile.

I had some friends and Mr.Moose waiting at Mile 25. The thought of seeing them kept me going. They were giving out free hugs to anyone who wanted one. I wanted the whole thing to be over, but I accepted a hug instead. The nice thing was it was literally downhill from there.

Maybe about 400 meters it was almost a straight shot to the finish. You know that thing when you can see the finish but it seems like no matter how much longer you run it still seems really far away? That was happening. However I know I was making progress and even passed a few people. I was trying to encourage those who stopped moving to dig in and finish strong. Too close to the finish to stop now! 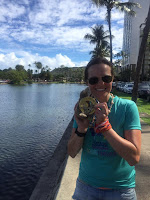 Down the funnel... I get my giant medal and a shell lei (yay Hawaii!). I make a bee-line for the mist showers and just kinda stand there for about a minute or two. It felt soooo nice. By now the sun was really starting to beat down so I was very happy I managed to finish before full sun. It was a bit confusing finding my finishers shirt, but after asking a few folk I found the tent. They also had a video of the finish line delayed by about 20 minutes or so, allowing runners to come up and watch themselves cross the line.

I found Mr. Moose who had my change of clothes. I queued up AGAIN for the bathrooms. On a side note, I wonder how terrified the Japanese were of the Hawaii public restrooms... Japanese toilets are always so clean. Anyways, new clothes and a quick baby wipe down. I was ready to head to Teddy's for a celebratory burger and then a massage.

Of course the day of the marathon it's pretty much the nicest day we had on our holiday. Typical.

Conclusion
Looking at my pacing I was actually a bit more consistent than I thought. It was the last 10k that I really lost ground. This makes me even more angry I could not motivate myself enough to keep plodding. That being said, I am still proud of overcoming the heat and humidity. When I heard the start time I thought they were nuts, now I think it was a godsend.

I was also fine with my food/water intake during the course. I waited until about halfway to start nutrition but I started having water well before that point. I never really felt dehydrated or a lack of power due to poor nutrition. It was more the heat sucking my energy.

You Should Do This Race If...