When A Runner Can't Run

It's every runner's worst nightmare. The last thing they ever want to hear. No running. It sounds so easy! There are plenty of other activities!

I thought I would be looking forward to a break after #RTB. And to be fair I was fine for the first few days. It was glorious sleeping in (until 0730) during the week and *gasp* 0900 on the weekend. Not worrying about how I was going to it my social life into my running schedule. Let me check my cal... oh wait! I know I am free!

Then the pain started to happen.

It was small it first, but now it's become more prevalent. A pain in my right foot, just below the ankle. I think this pain causes my arch pain as well, which occurs when I am stationary for more than a hour. My tennis ball has become my best friend. My roller is starting to get jealous.

All this is making me try and keep pressure of my foot, which means a whole load of NOT running.

Maybe this is a good thing. I am doing more core and arm work, while continuing to do my runner's strength training. I am doing more yoga. I worked up a great sweat on the spin bike. I have plans to swim and SUP (stand up paddle) when I go home next week.

Still-- my running shoes are calling me. Is that dust I see on them?! Surely not-- it has not even been two weeks!

This morning I went and got an X-Ray. The results will take a week (A WEEK O_O ). She did give me some cheering news: "Its not broken." This was my face. So in the meantime, I must wait it out. I am really hoping to get some idea of what is wrong and what (if anything) I can do as come September I want to start training for my marathon in. I also have a few races coming up...

Trying not to think about it. Take one day at a time. Continue my torrid affair with the tennis ball. Use smelly deep heat. Continue to keep my physical activity up. Eventually the day will come where I can dust off the running shoes and head out into the great big world for a run.

I just hope it comes sooner rather than later.
Posted by -Sketchymoose at 8:09:00 AM No comments:

Email ThisBlogThis!Share to TwitterShare to FacebookShare to Pinterest
Labels: running

Finished. It's incredible to finally say that. I know many people can relate. You have spent months planning something, checking and rechecking in the hopes everything goes right... then the day finally comes. And then-- over!

I cannot give you all the stats just yet, as I found out the hard way Garmin Vivoactive's only record 10 activities, wiping out most of my first day runs! Who actually RTFM? Luckily I have been able to get 7 of the 17 boroughs for that day from people, so all is not lost. I DO however have some awesome maps from the total of both days, including transport.

So I started out in Havering and then worked my way back west and then eventually south. I saw ponies on my way out to Elm Park, a bit of change from what you would expect. It was cool as I went from countryside to urban and back all in one day :D

I really remember in Redbridge being in this amazing open field and in the distance seeing the buildings in Canary Wharf and the City. The heart of London was never far away, yet in looking around it felt like you could have been anywhere in the English countryside.  People may find that depressing, but I found it reassuring-- this symbiotic relationship the urban area shares with the rural. It doesn't always jive but when it does, sheer brilliance.

Low Point Day One
Bromley. Not because of the route. I just had a mental breakdown. I just finished a solo run on Bexley  (I actually did a mini audio recording on my run you can listen to here) where my husband met me because it was getting quite dark and I was running (pun quasi intended) very behind. I was tired. I was hungry but I wasn't eating. I shut down. I had a bit of a tantrum near the station. I refused to move anymore. Unbeknownst to myself, my husband was desperately trying to get me to the station as we would miss the last direct train back into Waterloo East. We walked along the platform to try to get as close to 5km as possible. I felt horrible. After taking my shoes off, giving them a bit of a massage with my trusty tennis ball (godsend) and being forced to eat food, I felt much better. The last borough of the night (Southwark) was tough but I was in familiar territory and who can feel poorly seeing St. Paul's and Tower Bridge?

I was a bit worried on Sunday morning. I ended day one not so well, and was feeling tentative about the whole thing. I had a full day ahead, having someone to run with me every step of the way. I also got more encouraging words from my logistics team. There was no turning back now!

High Point Day Two
I really enjoyed Hillingdon. We got out at West Drayton and took the canal up to Uxbridge. We were so close to the M25, which is the defacto 'boundary' of London, yet it could barely be heard on the towpath. It was also blissfully quiet, something one can barely experience anymore along the more eastern bits that form Regent's Canal (go to Kings Cross/Camden on any given Sunday for proof of this). And not just this-- almost every crossing had a pub nearby! I am not talking weird pop-up we serve drinks in sardine tin pubs, I mean like proper looking country pubs! Amazing what a few miles can do to change up the scenery!

Low Point Day Two
I am happy to report I really didn't have a low point on day two. Nothing nearly as bad as day one. Maybe it's because I was taking paracetamol and eating properly. Sure there were points my brain was asking to stop, but my feet just kept shuffling along!

I of course could have not done those without my logistics crew. One of those individuals is Marijke, a Dutch woman I met on UKRunChat by chance when she was in London and became friends with. It was her who ultimately pushed me to choose this challenge over the London 100 cycle ride. She actually completed her own challenge earlier this year, going up the Alpe d'Huez three time in one day to raise money for cancer research. She flew over for the weekend to sit in a my London flat and stare at Twitter, and for that I am grateful.

I also have to thank my husband, who I am not sure I pressed into logistics service, but he took on the challenge with unabated enthusiasm. He was my voice of reasoning and reality check ("But Melissa, WHAT ABOUT BATHROOM BREAKS"). It was his methodical planning which ensured I had everything charged and ready to go. He also held my hand as I walked along the station platform in Bromley crying. Thank you very much Mr. Moose.

Of course I have to also thank everyone who supported me on social media, cheering me on with happy and encouraging tweets. When I had breaks I would check my Twitter feed myself, and it was very cheering to see people actually caring.

Also to my friends who had to put up with me talking about this for months leading up to it. Don't worry I have no major challenges planned yet, so you can all rest! Thank you for listening and being supportive.

I also need to thank everyone who donated to CrisisUK, whom I was raising funds for in this challenge. I know homelessness is a major issue everywhere, and I appreciate you all for helping to support those less fortunate. It was (and still is) amazing to see the amount go up and up!

And last but not least, to all my running volunteers. I could not have completed this without you. I know that for a fact. Some people I have known for years, others I met for the first time at station entrances. Either way you all greeted me with such warmth and enthusiasm, how could I not want to spend time talking with you all? Thank you thank you thank you. 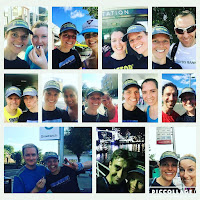 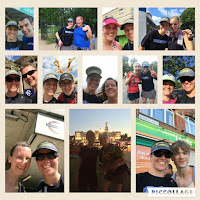 I have a video talking about my wrap up of #RunTheBoroughs, you can watch it below. I do not know what the next challenge will be or when it will be, but I hope this has inspired you to get out there and discover what the world has to offer you! Sometimes you don't even need to stray far :)