More Cotswolds Than You Can Shake a Stick At...

The Cotswold Way is roughly 102 miles long stretching from the un-assuming Chipping Camden to the ever famous city of Bath. The Cotswolds are a series of hills in the Western Midlands, covering 90 miles north to south and 25 miles east to west. These are not the Alps (the highest point is 1,083 feet) however you will get some of the best views in all of England, with the picturesque green meadows, stone walls, and (quite) a few sheep here and there. Those who love thatch-roofed cottages and pubs with pints and views will LOVE the Cotswold Way.
To be fair, I have not done the entire Way. I have gone from Leckhampton Hill to Winchcombe, however I have been blown away by the scenery which that portion provided. So I decided to take the 606 as far as it could (Broadway) and hike to Winchcombe.

Below are some pictures from my travels and a Google Map of my route. I highlighted the town of Stanton- the quintessential English village, and Hailey Abbey. The Abbey's remaining structure (nothing more but footing) is both a historical and photographic gem.

View of Broadway from Burhill Farm. Broadway was so named due to its wide street. Which, in American standards is still quite small (I would love to see two oncoming Humvee's duke it out) but for England well consider it a 4-lane highway. It used to be the main road between London and Worcester before some M# came along.
Broadway offers plenty of pubs and of course the Broadway Tower looming in the distance.

Stanton is a tiny town along the 12 mile route, but its so cute you have to stop and look around. Thatched-roof cottages are the norm rather than the exception, and you know villagers take pride in their little slice of England. I suggest stopping in for a drink at The Mount Inn, soaking in the views in summer or warming up the fireplace in winter. There are a few B&Bs here and with plenty of trails around this would be a good base camp for weekend walks. Or, the 606 bus comes daily with stops in Winchombe and Cheltenham, so if you got the time there is no excuse to stop in for the day.

About an hour walk from Winchcombe is Hailes Abbey. Built in the 13th century, it is not short of historical happenings, and was even a bit gruesome (many there died with the Black Death in 1361) at some points. Not too far away is the Hayles Fruit Farm and Restaurant, which offers tasty snacks and meals to those who make the journey. They also are one of the few places on the Cotswold Way where hikers can camp.


Winchcombe is a fairly large town with many of amenities for walkers and tourists alike. They just recently opened up their own 42-mile walk around the Northern Cotswolds. You see some of their blazes (yellow with footprints) along this section of the Cotswold Way. To reward yourself for a walk well done, you can treat yourself to Juri's Tea Rooms or if you fancy a pint try the White Hart Inn or The Fish Bar just off the High Street if some fish and chips is more your celebratory style :) Sudeley Castle a quick walk away, and if you are continuing the Cotswold Way Walk or are up to the uphill huffing and puffing, the burial mound Belas Knap is an hours walk.

The GPS of this route is from GPSies.com. I added my own pushpins to show my start/finish, and other highlights of the walk.

View Cotswold Way in a larger map,
Posted by -Sketchymoose at 9:40:00 AM No comments:

Lentils and their Suprising Aswesomeness

I have a new love. Lentils. I recently posted a spicy carrot and red lentil soup. It blew my mind, discovering something awesome (which I previously held as disgusting) for the first time. So EatingWell magazine had a bunch of recipes focusing solely on the mighty lentil, and I had to repost some.

Running out of breath... 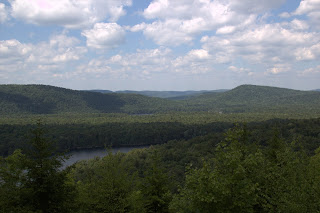 run? Well I didn't. No. I decided an 8 mile hike would be more fun (and less beer so healthier) for me. And I will admit I thoroughly enjoyed my hike in the Adirondacks, doing a loop at Rondaxe Fire Tower then heading to the Vista Trail. It was great to be trouncing thru the forest with amongst the tall pines and being delighted once in a while with a calm serene lake. I emerged from the trail sweaty and feeling good... some elevation gains and drops, all rounded off with some amazing views (well it WAS called the Vista Trail right?)

However my nagging guilt at not doing the race still looms heavy on my mind. I went for a run yesterday, nothing huge, a 2-miler. I had pains on my sides but I did not feel like I had to stop. So, now I am committed to running ten-miles because I am annoyed that I didn't at the Boilermaker.

So, now that 'vacation' is over, I am eating healthier and I already feel better because of that. However, I am going to try and run 3x a week. I plan to start 2-4/miles a go, and then progressively getting a tad longer each week. If I join a gym I may swap out some spin classes because, I like spinning much more than running, and doing one can improve my time/speed in the other.

Anyways, some links to help beginner (or returning) runners get back in the game:

Core Exercises for Runners: Like I said above, doing one exercise can help in performing another. The key to good fitness is trying to work everything using cardio and strength techniques (safely and effectively)

Food to help burn more during workouts: You are going to run, might as well make the most of it and possibly burn 55% more fat than others who don't eat these superfoods prior to workouts

You are breathing wrong... trust me: Its amazing how breathing really impacts our activities. I noticed this with SCUBA diving. Once I started paying more attention to breathing underwater I significantly increased my dive times as I could use the O2 better. I am sure the same goes for running.

Improve Your Pace: To get to be a better runner, you need to strengthen your legs and feet. This helps! (I will probably be doing this and the core exercises today as it is raining)

Positive Thoughts equal Results: So you had to take a breather during a run... so you had to walk up the rest of the hill. Rome was not built in a day. Make realistic goals and suddenly its all quite achievable.

No matter what exercise you prefer: cycling, hiking (me!), or running... stick with it and challenge yourself!
Posted by -Sketchymoose at 11:43:00 AM No comments:

I just want to point out this is not an exhaustive list by any stretch of the imagination, but some highlights from the area! 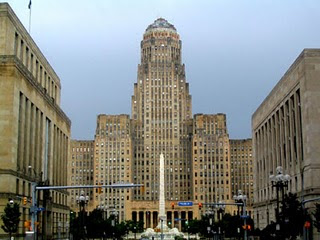 Made in Buffalo... with pride

I used to cringe when people would ask me where I was from. After muttering the pariah term "Buffalo" I was generally met with phrases such as 'wide right', 'no goal', 'rust belt' or worse yet, 'is that near New York City?'

However now I am hearing a bit of a different tune. I still get those comments, however its from people who have never even been to the Buffalo area. Those people who have actually been to 'The Queen City' or the 'City of Lights' are quite amicable towards it... they even enjoyed it!

I knew it was just a matter of time before I felt the same. You can take the girl out of Buffalo, but you can't take the Buffalo out of the girl. In the next few blogs I will post some of the things and places in Buffalo which made me fall in love with my hometown all over again.

I know I know I know... its summer. What can possibly be going in Buffalo in the winter?! Well with all that snow, we got tons of winter sports! Downhill/cross country skiing, ice skating (indoor or outdoor), hockey games (Go Sabres), and the ever beautiful Festival of Lights in Niagara Falls. Well that one is on the Canadian side... but I heard rumours it might get started up again on the US side....
Posted by -Sketchymoose at 2:07:00 AM No comments:

Some people are wine snobs. They sniff and swirl their wine glass and scoff at two buck chuck. There are also car snobs who will argue to the death of why standards are better than automatics, and will always remind you while driving (usually them somewhere).

Then there are Buffalonians: We are wing snobs :)

I mean this in the nicest way possible because I am one myself. Yes, even after years of living outside the All-American city I consider myself a wing snob.

I sneer when I see 'Buffalo chicken wings' on the menu. Please do not make laugh. If you have to specify they are 'Buffalo' style they probably are not.

We do sniff, we want to smell the sauce before the wing touches our lips. If you can't smell the sauce: you don't have enough sauce or it's weak sauce. Please take it away.

We evaluate the integrity of the wing. Can you see bone where meat is supposed to be? Do the double bones (known as the wing) hold their own or do they break easily? No one wants a weak infrastructure on their wing. We want meat on them bones.

Speaking of meat: we don't like tiny chicken wings either. We don't want the drumsticks from Cornish Game Hens. No. We like genetically enhanced mega chicken wings. OK maybe not that big... But seriously it should take me more than one go to get the meat off the bone.

Sauce. This is where it gets tricky. Trust me though, pineapple teriyaki is NOT a Buffalo style chicken wing. Hot, medium, or mild. BBQ MAYBE- but don't press your luck.

Blue cheese. You use ranch you say? No. Just no. And it has to have chunks, it can't be runny either. I suggest Marie's but that can be hard to procure depending on the area. Don't use Blue Cheese? :: sigh :: Fine, just don't use Ranch. Believe me I love Ranch dressing, but on wings it's just a no no.

Also, celery and/or carrots MUST be included. Do not charge extra- this is an integral part of the dish. How better to slather the blue cheese on your wing than with a stick of celery? OR, tell yourself your meal had veggies- and is therefore healthy?

Of course there is proper cooking method. There is only one: deep fry. Don't try to cut calories on this dish or it will end in tears (and sow seeds of contempt with your Buffalonian friends)

Amazingly this seemingly simple dish is actually a work of art, and we take pride in having the best. We generally do not order wings outside the area. When we do (hey, there are always exceptions) we are scrutinzing to a fault, and we end up wishing we didn't order it after all.